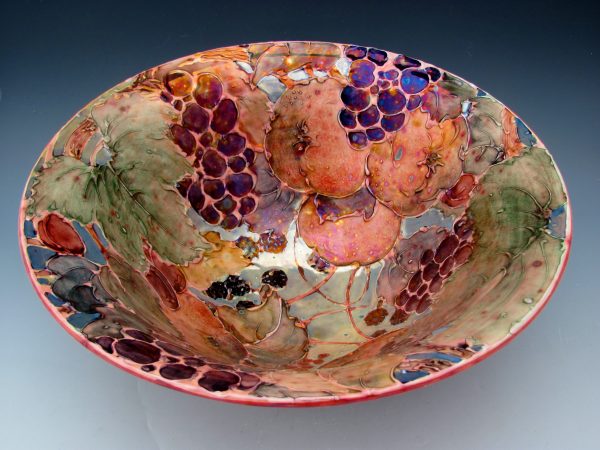 I was always “arty” and remember a painting of mine depicting daffodils hanging by the staff-room at school.  I did not catch the pottery bug until my early twenties having trained as a gardener initially.  My mother had some pieces of early twentieth century Art Pottery which inspired me to go to Stoke-on-Trent to study for the BA in multidisciplinary design specialising in ceramics.

One of the techniques that intrigued me most was tube-lining, and it was through showing some examples to a gallery in Derbyshire that I had my first exhibition.  It was a sell-out and I never looked back.

Those early days were pretty crazy.  I had a small kiln in the kitchen of our little terraced house in Stoke and was in fact dubbed the “kitchen potter” by a local newspaper. I could not keep pace with demand and moved to a workshop nearby having acquired a much larger kiln.

Subsequently I have had a successful career with a mixture of gallery shows and high quality craft fairs including the prestigious Chelsea craft fair and the equally high brow “Art in Action”.

In the mid nineties, it was time for a fresh challenge and we moved to Wales. It was a long held ambition to have a home-based workshop studio close to the inspiration of much of my work.  Here in Wales I have been able to express both a more direct and intuitive response to nature as well as a new found interest in contemporary shapes for the new work.

In the last few years, developments have advanced in several directions.  The “Faceforms” have been an exciting departure from the floral designs attracting interest wherever shown!  Landscapes have also appeared on the new designs often combined with flowers.  Thrown shapes have given way to slab formed picture vases and the matt glazed “paperform” series entitled “Nature Studies” is another new venture in a modern idiom.

Traditional shapes still have a place though, and after a long period of research I have taken this range forward with some dramatic lustre and flambé effects.